Backstory: I purchased this item, sight unseen, sometime in the late '90's as part of a 'lot' of Beatles records at an auction - I could tell there were several sealed albums along with several typical used condition records in the box. I had no idea at the time that one of those was this Butcher Cover. Unfortunately, the actual vinyl album inside the cover was the Beach Boys Today! and it was in very rough condition. A quick search through the rest of the open albums didn't reveal the correct vinyl, so this is the cover only.

Here is your chance to own a fairly decent (I've seen worse peel jobs - see photos) copy of a true collector's item at a reasonable opening bid and with no reserve. 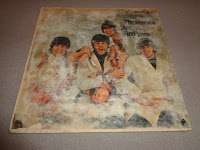 The Beatles - Yesterday and Today - Peeled Butcher Cover - Cover Only